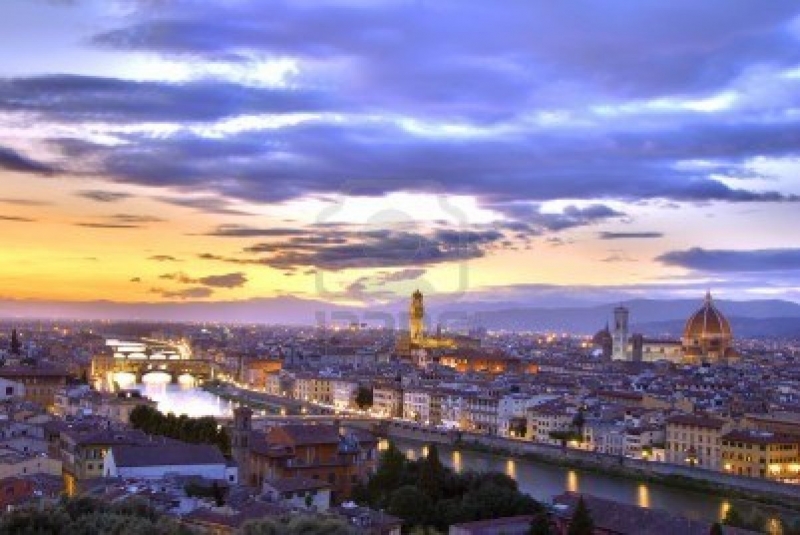 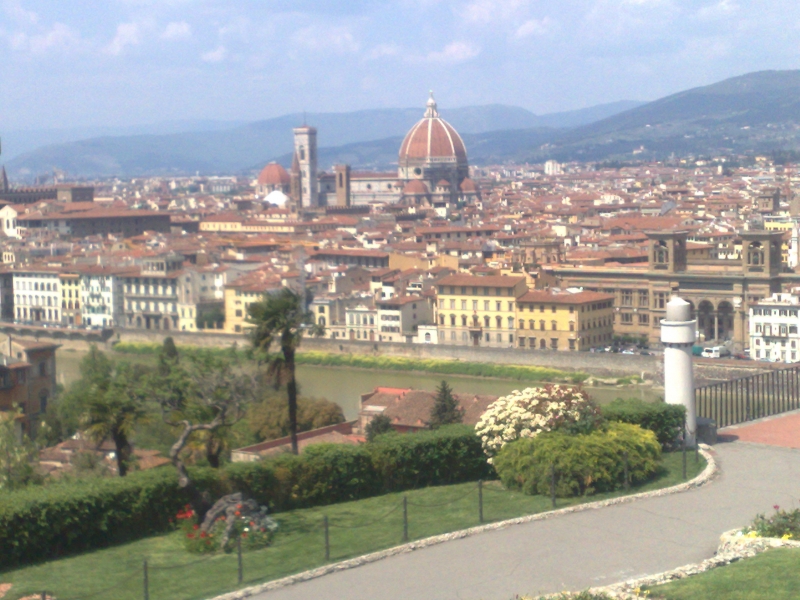 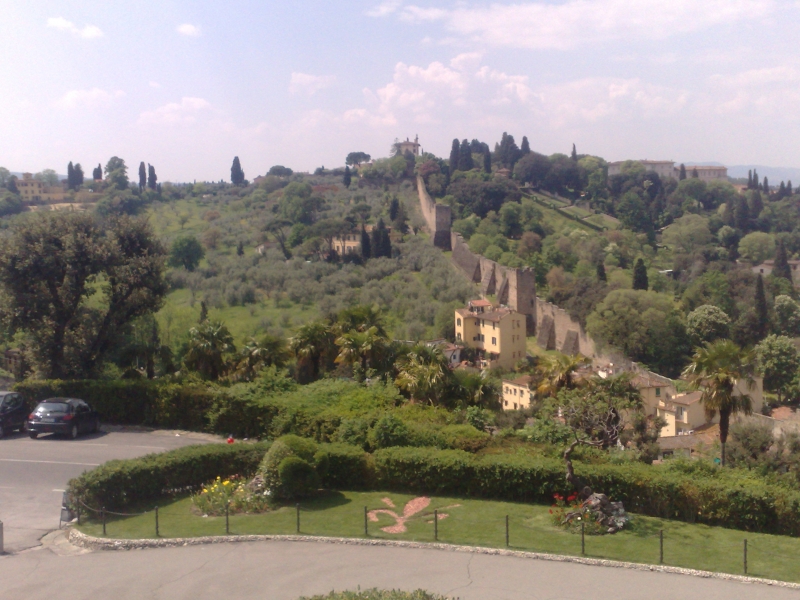 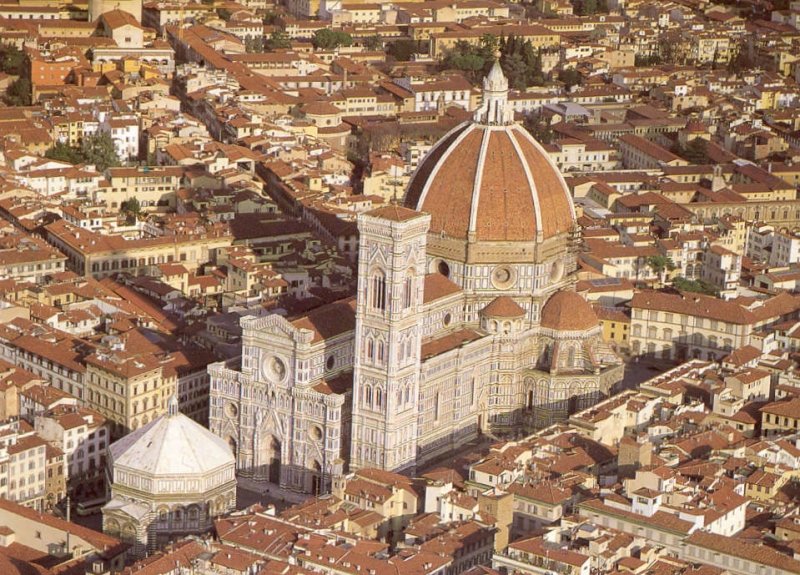 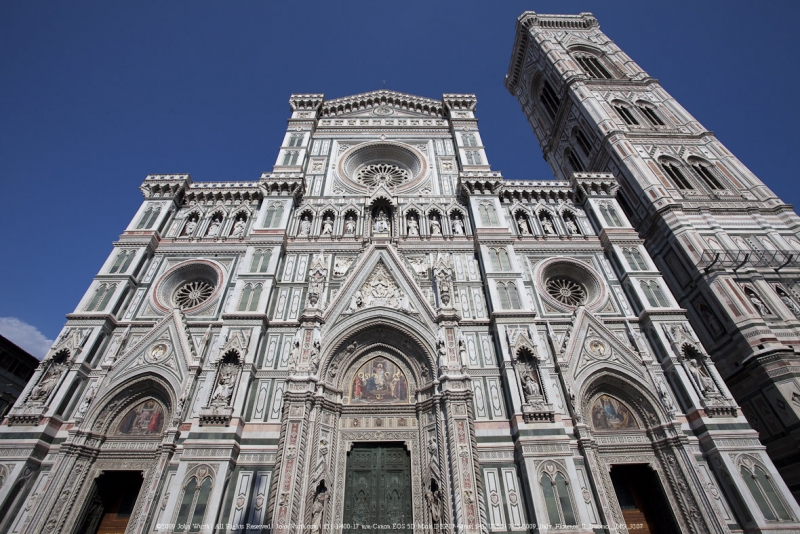 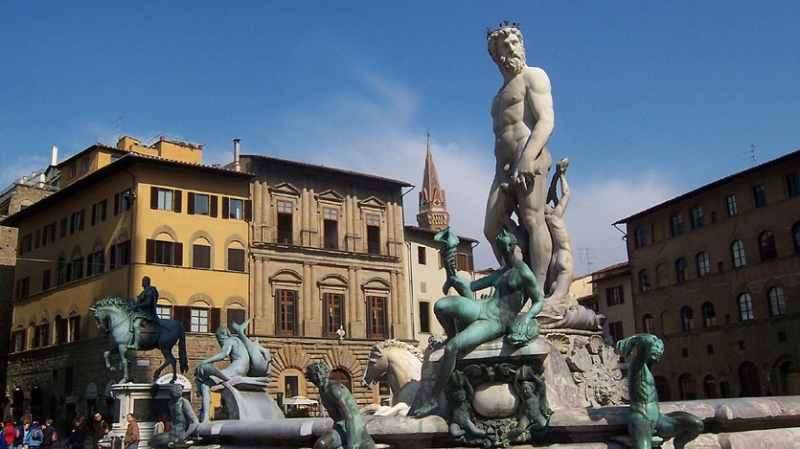 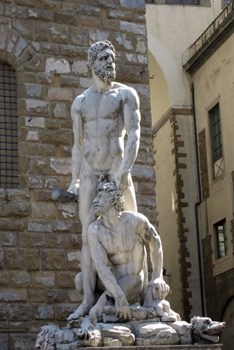 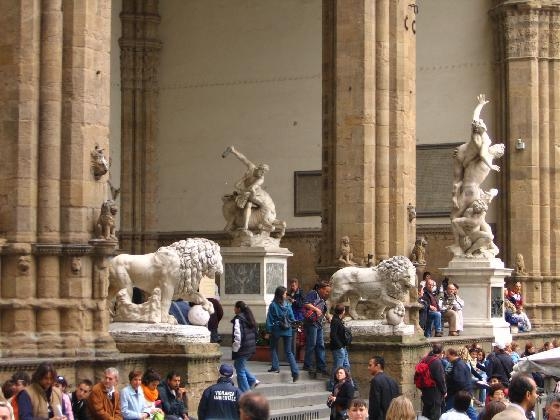 [Show thumbnails]
Florence holds the distinction as the official city of Art and celebrates a heritage of architecture, paintings, sculptures, scientific and historical memories.

Florence is known as the cradle of the Rennaissance or the "rebirth of western classical culture, art, literature, philosophy, scence and poetry. One can place the beginning of the Rennaissance frim the time of Dante to the death of Gallileo: 13th to the 16th centuries.

One might say that the beginnung of the modern world starts from the Florentine rennaissance. Banking as we know it, the use of Arabic numerals, or the decimal system if mathematics, the perfect science is first used in Europe in Florence. Architecture is given a great push forward by Filippo Brunelleschi, who we may call the father of the new art of the Renaissance, that is perspective in painting, goldsmithing, sculpture, and with his great Dome that is the first if its kind since the fall of the Roman Empire.

From it's declaration of independence from the Holy Roman Empire in 1171, Florence began to manage its own affairs by establishing a republic, with the first written constitution in western Europe. Two generations before Magna Charts in England. A modern republic, with voting and law making.

By 1242AD, Florence, had its own hospital, ambulance service and orphanage, which still exist today. By 1252 the city established its own coinage or currency: a gold coin of about 23kts, called the florin because it had the fleur-de-lys or flower on one face. It became the European coinage for three centuries. It was used in England, Holland (florein or guilder-gold coin) and is still the currency of Hungary, the Forint.

The banking system was modern, one might say that the capitalistic system begins in Florence. There were agencies all over Europe, North Africa, and the Near East. The use of the letter of credit begins here, the ancestor of plastic money so to speak. It was the Medici bank agency in Seville that financed Christopher Columbus' voyages to the new world. Amerigo Vespucci was the agent there and a voyager and map maker too, born in Florence and the nephew of Simonetta Vespucci who posed for Botticelli's Birth of Venus. The Medici family with Cosimo the Elder, became the richest banking family of Europe. They were also patrons of philosophers, artists, poets, and the greatest book collectors of their time. Cosimo the elder helped Charles VII, king of France to set up his finances without interest and thus was made the official cousin of the king with the right to use the royal coat of arms on his own. Catherine, Cosimo's great great grand daughter became queen of France.

Giglio fiorentino
The Florentine coat of arms or symbol is the red fleur-de-lys known in Florence as "The Lily",  il giglio.

The present city hall but was always the seat of government since it was built. The first Parliament of the Republic, the royal palace of the grand dukes and the first King of Italy in the nineteenth century when it became the capital before Rome was declared the capital in 1869.

Throughout the centuries it has been redecorated and beautified by various artists.

Built in the fifteenth century by a Medici rival, Luca Pitti, who went bankrupt, later was bought by the Medici Grand Duchess, Eleanora, to become their royal palace. She also had the Boboli gardens built as a park to enjoy the outdoors' fresh air without having to leave the grounds. It too was enriched and enlarged throughout the centuries. It is now one of the most famous museums in the world with its various galleries and treasurey.

The "Old Bridge", another world famous symbol of the city, crosses the Arno river at its narrowest point. Built in 1334, it replaces several bridges since Roman times. The Medici had Giorgio Vasari build a corridor to run over the bridge to avoid the crowds.

It survived the Nazi-fascist bombing as they fled from the allies in 1944, the other bridges being destroyed to prevent the allies from crossing over to the city.

It is now a jewelry shopping bridge with some outstanding jewels to please any eye.

The Uffizi Gallery, is the first public art gallery, opened in 1582, and probably the most important one in the world with its incomparable collection of ancient Greek and Roman, medieval, renaissance art. It houses the innumerable masterpieces of Cimabue, Giotto, Lippi, Botticelli, Leonardo, Michelangelo, Rafael, Titian, Caravaggio, Dürer, Rembrandt, Goya and many others.